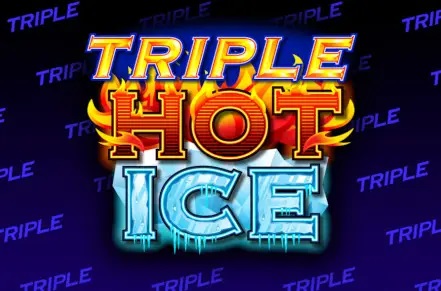 Triple Hot Ice doesn’t actually provide a lot of that ice if you ignore its logo. If you look at its top icons, it’s primarily about fire, and altogether, IGT chose the most straightforward design they could. Although it has fewer reels than a contemporary slot machine, its potential is unaffected.

There are 5 active lines scattered throughout the 3 reels of Triple Hot Ice. If all the appropriate symbols appear on the reels, the maximum payout is 2,000 times your original wager. The only significant features available are multipliers up to 27x, but as you can see, they are pretty potent. I believe you will enjoy the RTP, especially given that it is set at 96.56%.

Since there aren’t many lines, the $0.05 minimum bet shouldn’t be shocking. Additionally, the maximum bet is fairly substantial, allowing for wagers of up to $500 each spin.

Thanks to the top symbols forming combos on those 5 lines, wins of up to 2,000 times are achievable. Additionally, multipliers may appear as symbols and be applied to wins to increase them by as much as 27 times.

The RTP for the slot can vary slightly, but it often hovers around 96.56%.

You have those five lines, and typically all it takes to win is for three identical symbols to appear on the same line.

The overlay Triple Logo, which can appear next to ordinary symbols, is the sole real feature provided. When it does, the victories that contain that specific symbol are multiplied by 3x. With 1, 2, or 3 Triple overlays being available in a combo, multipliers can increase wins by 3x, 9x, or 27x, respectively.

It has a traditional design and only a few symbols that can appear on the reels. Retro is another word for dated in this context, which describes the graphics. The Bar logo, the 5 Bar, as well as the numbers 7, Double 7, and Triple 7 are among its icons. You might obtain blank spaces in some spots instead of symbols, thus even just getting three symbols of any kind can result in a tiny prize.

If you prefer a simpler experience, Triple Hot Ice’s huge multipliers might help make this free slot engaging even though the sample version of the game may not wow you with its aesthetics. The fact that Triple Hot Ice is a slot machine with a classic and traditional theme alone earns it bonus points. For players who enjoy reading traditional themes, this game is generally quite decent. The Triple Hot Ice slot has a great selection of bonus features, but I also enjoyed it for other reasons, including the aesthetics and potential payouts. Overall, if you enjoy playing progressive jackpot slots and are ready to sacrifice some of the RTP for that aspect of it, this is a good alternative. The slot boasts a nice design, and the potential to pay big.