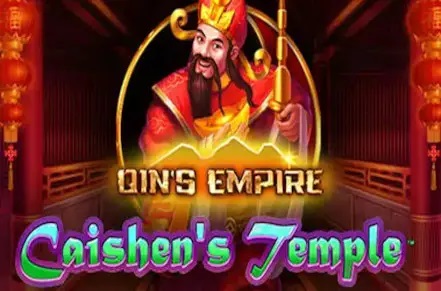 A group of slot machines with East Asian-inspired artwork includes Qin’s Empire: Caishen’s Temple. This series, which also includes titles like Celestial Guardians, is called Qin’s Empire. Even though the functionality may vary, they all share Chinese-inspired visuals, maintaining the same overall design.

In Qin’s Empire: Caishen’s Temple, you’ll find 5×3 reels with 50 paylines on which you can form winning combos. Free spins and the Qin’s Empire bonus with respins or wilds are two of the significant special features available.

In the end, it appears that a Grand Jackpot worth 2,000 times the bet is the maximum that may be won at once. Return To Player stands at 96.46%.

A high payout of 2,000 times the bet could be awarded by both unique winning combos that end up covering all lines and the Grand Jackpot, which is won in the main feature. Although the Return to Player is a respectable 96.46%, the awards could be greater, so I shouldn’t really be complaining.

On the reels, Caishen himself will appear, prepared to take the place of the other symbols. The Cauldron and the Temple, however, are on their own because the wild doesn’t do that for the feature symbols.

Temple scatters can appear on the reels and can pay 5x to 50x the wager when they appear on reels three to five. You will also receive 9 additional spins at the same time. They have retriggerable feature and growing wilds.

There are Jade and Gold versions of the Cauldron. The core feature will activate at 6+ in either version, however there are changes.

If triggered using Jade Cauldrons, you unlock one screen and can unlock the remaining three by laying down 8, 16, and then 36 additional Cauldrons. You can use all 4 screens simultaneously if you have the Gold version.

It is a straightforward Hold & Respin feature that offers 3 rounds at first. To win the Grand Jackpot, fill all 15 places, but all other Cauldrons will also pay out.

In most regards, expect a standard Chinese-themed slot machine with symbols that can be seen in many other games. The materials are of excellent quality, and the hues used span from dark crimson and gold to jade-like green.

Overall, Qin’s Empire: Caishen’s Temple is a decent free slot machine that was created for the Chinese market, but the features are essentially universal. However, they did make the respins better. Its appeal should be aided by the adorable artwork. I enjoy the slot machine; it has excellent graphics. If you can locate it with the RTP set to the maximum, it is definitely worth playing and gives about 2,000 times the jackpot per game.