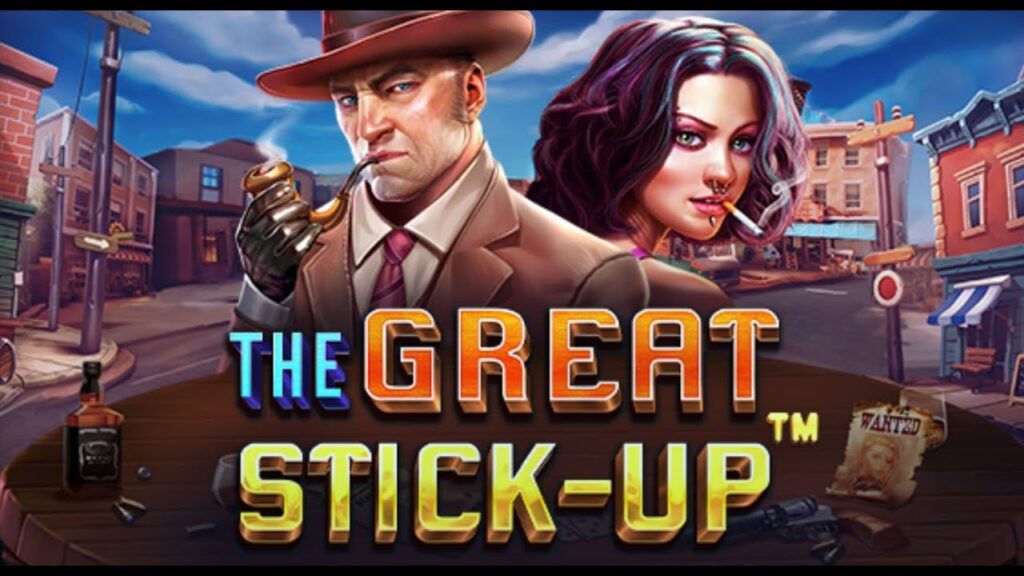 The Great Stick-Up, a new slot machine from Pragmatic Play, appears to transport us back in time by nearly a century. It depicts the streets of an early twentieth-century American town and tells us a story about a heist that can make a gang’s members wealthy. It’s well-designed and has a stronger plot than most online slots these days, so it’s doing a good job of grabbing a player’s attention.

The Great Stick-Up is a slot machine with 5×3 reels and 20 winning lines. Overlay symbols, wilds and scatters, and free spins are just a few of the major features available. If all goes according to plan, you could win 5,000 times your initial investment. The RTP ranges from 96.30 percent to 96.90 percent, with medium-high volatility.

You can begin playing The Great Stick-Up with a minimal wager of $0.20 per line, which covers 20 lines. There will be possibilities to increase that amount, and the most you may spend every spin is $100.

If we go by what’s commonly available in modern slot machines, The Great Stick-Up performs about as well as one could expect. For players who can place large enough bets, the 5,000x top jackpot may imply $500,000 in cash. There is more risk involved, but the long-term prospects appear to be promising, as the RTP of 96.30 percent is above average.

The Detective Wild will be one of the game’s most important symbols, and it will be able to be utilised as a substitution in new combinations. The scatter symbol in the slot cannot be replaced by a wild, but all of the other symbols are. If you get a five-wild combination, you’ll win 75 times your bet (regulars pay up to 50x).

The scatter symbol in the slot is a Police Siren, which can appear on all five reels. You can win 2x to 100x your investment if you have at least three of these visible, plus you’ll get free spins.

You are awarded 7 free spins, which have a higher potential than paid spins. The availability of additional Sticky Mystery symbols, built specifically for this feature, is one explanation for this.

The Sticky Mystery symbols appear and stay in their present position. At the end of each spin, they all transform into the same symbol. The symbols that can be revealed increase in value as you advance through the feature, as long as you gather two overlay symbols for each upgrade. Whenever such an upgrade occurs, 1 extra spin is added to the total.

In terms of the slot’s plot, you’re looking at a robbery from the early twentieth century. It’s a well-designed game overall, with guns and other objects that are usual for the time, and one that I’m sure you’ll like looking at.

Pipes, magnifying glass, detective hat, handcuffs, map, money, and a pistol are among the game’s bottom symbols. The premium versions include photos of the four main characters in the story, three males and one woman (top symbol). There are other feature symbols, such as the mystery icon, the police siren scatter, and the detective wild.

The free spins feature has some unique mechanics, so that’ll be where the most of the action will take place. I wouldn’t hesitate to recommend it because it has a good design, large enough payouts, and a high RTP.