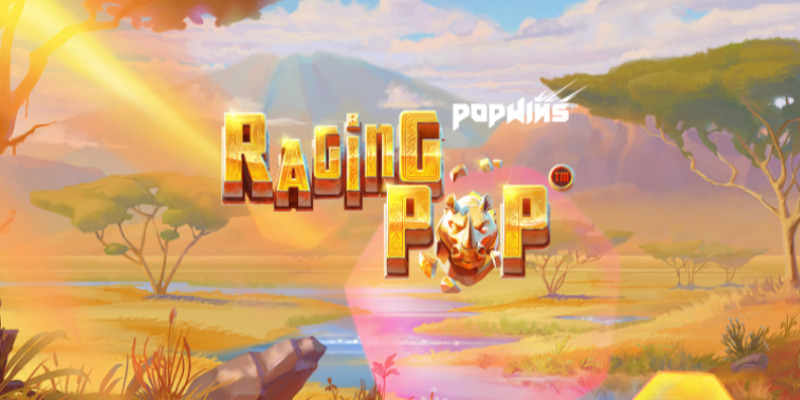 RagingPop is the eleventh PopWins game to come off Avatar UX’s assembly line, demonstrating its enduring popularity. The studio has relocated to another exotic corner of the world for RagingPop, leaving the ‘country of the rising sun’ where we last saw them in MonkeyPop. This time, they’ve arrived in the swaying grasslands of Africa, a favourite slot destination, bringing with them dynamic reels, growing rows, ways, and possibly large random multipliers.

RagingPop is a smart-looking game that crams in most of the aesthetics this genre is known for, but not being as immediately eye-catching as MonkeyPop. A rushing stream, golden grass, acacia trees, distant mountains, and mostly blue skies are among the natural elements. In a weather-related twist, when the bonus round starts, the clouds open up and it pours. It’s a minor point, but doing anything different, no matter how insignificant, is always appreciated. The game exudes quality and demonstrates how far the developer has progressed in its little existence.

If RagingPop were a safari, it would be disappointing because there are no animals in sight; yet, some do appear on the game’s 6×4 reel set. This is the grid size at the start of each base game spin, however it can expand up to 7 rows high during free spins or the Raging Rhino feature, increasing the number of win ways from 8,196 to 235,298. Because matching symbols pay from left to right as well as right to left, starting from the relevant outer reel, it can be used in a variety of ways. The stakes range from 20p to £/€40 every spin, and this highly volatile slot has a 96.34 percent return on player value.

Rhinos are the super high-value symbol in RagingPop, paying 15 times the wager for six of a kind, while crocodiles, buffalo, and leopards pay 5-6.25 times the bet for six of a kind. The mids, which include butterflies, fish, and birds, are worth 3 times the stake for six, while the J-A card ranks, which pay 1-1.5x for six of a kind, are found at the bottom of the paytable. Finally, wilds assist in the completion of winning combinations by replacing for any pay symbol; however, wilds only occur during free spins.

Avatar UX’s main contribution to slot evolution – the PopWins mechanic – is at the heart of RagingPop. Surprisingly, this feature is only available during the free spins bonus round in RagingPop. When a winning combination appears during free spins, each winning symbol is removed and replaced with two new symbols, raising the reel height. The process repeats if a fresh victory is generated, albeit reels can only expand to a maximum of 7 positions high.

The Raging Rhino feature may appear at any time during the base or bonus game. When this happens, the reels expand to 5, 6, or 7 symbols in height, and a multiplier is formed, which is applied to any winnings. The multiplier can go up to 500 times. If you get 3, 4, 5, or 6 scatter symbols, you’ll get 10, 15, 20, or 30 free spins, respectively. The reels begin at four positions and can increase to seven using the PopWins feature, but they return to their original height at the start of each new free spin. Furthermore, every ten consecutive free spins increases the height of the reels by one symbol, which they maintain throughout the feature.

However, before the free spins begin, players can bet their winnings on the gamble wheel for extra. Players can win 15, 20, 25, or 30 free spins in the gamble feature, which includes various stages. If you lose the wager on the first stage, you’ll be taken back to the base game, but if you lose at higher levels, you’ll be taken to the bonus round with a smaller amount of free spins, as indicated by the wheel.

It looks professional and runs as smoothly as any of their other projects. From a gameplay standpoint, there are a few shocks that might be interpreted as either negative or positive. The biggest surprise was seeing that PopWins was not included in the base game.

The Raging Rhino can activate at any time, so it’s not a complete lack of features, but without PopWins, RagingPop’s base game is one of the most uninteresting in the series. If you enjoy Megaways without cascades, Raging Rhino could be the perfect PopWins slot to start with. RagingPop, more than any other PopWins game, is built around its free spins bonus round. This is where things get interesting, with prizes up to 20,000x the bet available. RagingPop also comes with one of Avatar UX’s more forgiving gamble wheels.

RagingPop is perhaps not the best option for those hoping for a full-fledged PopWins experience. Others in the series cram in a lot more popping possibilities than RagingPop does. Perhaps it’s a sign of maturation that Avatar UX doesn’t feel the need to impress by cramming in as many fireworks as possible.