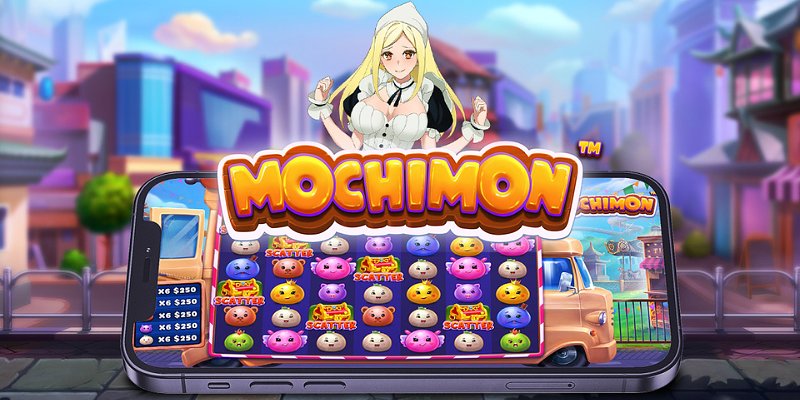 Anime-inspired visuals on Mochimon slot machines are rather widespread right now, but that won’t stop anyone from creating more of them. One of these slots, Mochimon, is the first release of the year from Pragmatic Play. Although the major figures and symbols appear to be adorable depictions of fruits and animals, you may learn more about them by reading our review.

Mochimon has 7×7 reels and a Cluster Pays engine for its vast gaming area. Your goal is to win up to 5,000 times your initial investment. Fortunately, the 96.50% RTP appears to be in your favor, despite the fact that the high volatility will be difficult to deal with. The primary game elements are free spins, progressive multipliers up to 128x, and tumbles.

Starting bet for the game is only $0.20, which is a manageable amount. You can employ bets up to $100 for a higher return.

Finding a 5,000x top jackpot in a game created by this developer is commonplace and not unexpected. The slot compensates for its high volatility with an RTP range that goes up to 96.50%, even though I’m not pleased by that highest prize (lower values are possible).

49 different symbols can be found on those seven by seven reels, and if five or more of the same kind appear adjacent to one another, they can cluster to make a cluster. When there are 15 or more symbols together, the top payouts for each symbol are awarded. The tumble mechanic activates and switches out the winning symbols after each win. The tumbles carry on in the event that a fresh cluster forms.

You will also receive a bonus from the fall in the form of a multiplier that will be applied to winning positions. Following the formation of each new cluster in a winning symbol place during the same spin, the multiplier for that position doubles. A single position’s maximum multiplier is 128x.

There is one more feature that could award you up to 30 free spins in exchange for three to seven scatter symbols. The multiplier values based on symbol locations will only increase until the feature is over and won’t reset between spins. It’s also possible to retrigger the feature.

You can see a metropolis behind the reels and an anime female next to them. The actual symbols, which are illustrations of various animals, are adorable (bear, butterfly, pig, etc.) They are not particularly related to the anime girl who is sitting next to the reels.

The sole reason Mochimon is an intriguing free slot machine is because of the significant multipliers that can build up and be applied to your winning clusters. It negates the idea of a multiplier of up to 128x coming from each symbol in a cluster, so I’m not a great fan of that restricted 5,000x jackpot.