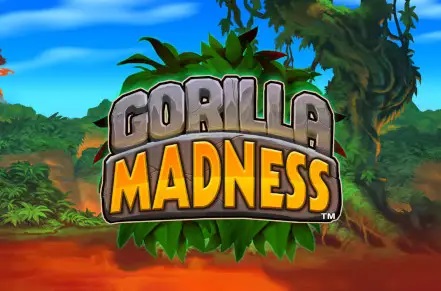 The Gorilla Madness slot transports us back to the primordial era, when dinosaurs were still alive. Even if it wasn’t alive when the dinosaurs were, the gorilla is also shown on those reels. This new slot from Scientific Games (Light & Wonder) seems intriguing due to its features and the fixed jackpots that are offered.

On 5×3 reels, you’re playing a game with 243 possibilities to win. Along with the four fixed jackpots that are there, the slot machine has a potential payout of almost $242,000 (2,761 times the wager) (from Mini to Grand Jackpot). The RTP maximum is 96%. Free spins, wilds, or the Jackpot Room and its winnings are major elements.

Players can place a minimum wager of $0.18, and from there, the amount could increase to as much as $88, depending on the round.

In the Gorilla Madness demo game, the biggest prize is 2,761 times the bet, or almost $242,000 in cash (maximum bet). Additionally, four fixed jackpots with top payouts of 2,222 times the wager are available (Grand Jackpot).

Features of the game Gorilla Madness

Gorilla Madness focuses on wilds to make it simpler to generate winning combos. They can, however, only land on the middle reels of the game (2-4).

They can also be used to obtain entry to a volcano eruption, which can open up the Jackpot Room, which is their second usage. The trait is not assured by the existence of the wild. It will happen at random. You will receive a new game area with a total of 12 options if you manage to unlock it. To be eligible for a prize of up to 2,222x, you must find three symbols of the same kind (Grand Jackpot).

You can activate 10 free spins (and they can be retriggered) by landing three or more scattering Golden Gorilla statues. The removal of the low-value symbols from the reels is this feature’s principal benefit.

Winning combinations are simple to build and considerably more impressive because you get to employ fewer symbols and they pay more on average.

We are transported to a region of the past that is covered in jungle and has a distant volcano that is exploding. Although the gorilla may be the main focus, many of the other emblems feature dinosaurs. The Royals are concealed behind crystals, which are the lower symbols.

The design’s aesthetics are unique and entertaining, with big cartoon-like images. Almost waiting for someone to cry “Jumanji!” when they find themselves in prehistoric times in a jungle with a seething molten lava river running by and an exploding volcano in the distance. or for the menacing drumbeat to begin. Instead, we hear the rhythmic drums of a tribal culture beating in time with a xylophone as the game loads. The song itself is ok, but it has a slightly different vibe from Gorilla Madness.

The free Gorilla Madness slot machine contains a few features that appear nice, but overall it’s not a particularly complex slot machine. It might be an excellent alternative for gamers who don’t desire intricacy in their games with the correct RTP.