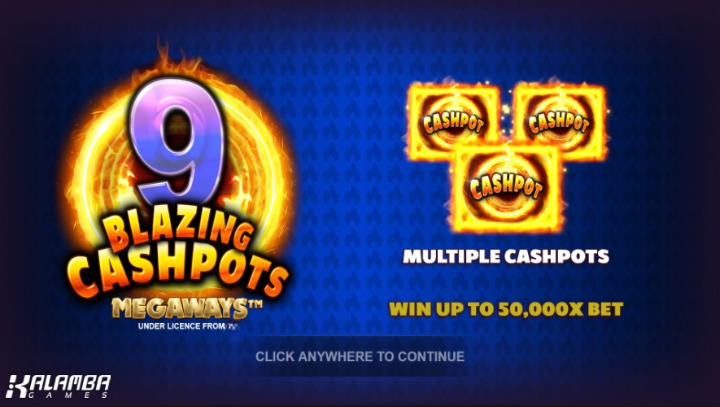 Kalamba Games has maintained a traditional, classic feel in its 9 Blazing Cashpots Megaways slot game. The game features classic slot symbols, a prize ladder, and a simple background design. The overall aesthetic combines elements of the 9 Masks of Fire and fruit slots but with the added excitement of Megaways and larger prize values.

The game has a grid with six reels, each displaying up to six symbols, creating up to 46,656 ways to win. The Megaways engine can randomly change the number of characters on the reels for each spin, adding variety to the game. To win, players must line up matching pay symbols on consecutive reels from the left side of the grid. The game is highly volatile and has a default return to a player value of 96.51%. Players can bet between 10 pence/cents and £/€15 on each spin, and the game is available on all devices.

The individual elements of 9 Blazing Cashpots Megaways, such as fruit, sevens, instant prizes, and free spins, are not necessarily unique or new to the slot game genre. However, Kalamba Games has successfully combined these familiar elements to make 9 Blazing Cashpots Megaways stand out as one of the top-performing slots in this popular gaming category. The game’s impressive statistical and mechanical features contribute to its success, making it one of the best “9 Masks of Fire” style games.

One notable feature of 9 Blazing Cashpots Megaways is the inclusion of the Megaways mechanic, which is not often found in games of this type. Some players may miss the absence of tumbles, reactions, or avalanches, which could have added excitement for the chance to turn over extra scatter symbols. However, the base game still has the fast-paced gameplay typical of fruit slots, and the free spins round increases the tension even further, especially for players who have purchased an enhanced bonus. Additionally, it is theoretically possible to win up to 50,000x the bet if 25 scatter symbols land. While this may be challenging to achieve, it is an appealing possibility.

While the features of 9 Blazing Cashpots Megaways may not be entirely innovative, the game still has value for the right player. The inclusion of Megaways, the option for players to purchase enhanced spins with even greater potential rewards, and the well-designed gameplay with the possibility of high rewards make it worth considering for fans of fruit slot games. However, if you are not impressed by large potential payouts, you may view 9 Blazing Cashpots Megaways as another similar game.